Vivid Coral Technologies uses films, filters and lenses to filter light after it has made contact with your coral. As science illustrates, water is a natural filter of light.

The vast majority of coral we collect is harvested from below 10 feet. Therefore, many corals are naturally exposed to higher amounts of blue light. This is one of many reasons why aquarists choose lighting systems and LED’s with higher blue concentrations. Not only does this keep corals healthier, but more VIVID in color. High concentrations of any spectrum of light may drown out coral color and make them appear dull. Vivid Coral Film allows users to increase the blue light concentration and achieve more VIVID colors while protecting our eyes and delivering an enhanced natural color, keeping your corals happy.

So Use VIVID Film and Turn Up Your Blues!*

Using Vivid Coral Film you can get color very inexpensively. By using your current LED system and increasing the natural blue spectrum, you can increase your corals colors!

High-energy visible light (HEV light) is high-frequency light in the violet/blue band from 400 to 500 nm in the visible spectrum. The AMDF (American Macular Degeneration Foundation) states these blue aquarium lights may be damaging your eyes! AMDF

NO CHEMICALS TO ADD

Our method of making your corals Vivid and colorful is by filtering out "Blue Noise" from your vision. This method of coral coloring works irrespective of chemical dosing!

Understand how our technology works! It's not magic, its better!

Without light there is no color. Color is derived from the distribution of light power versus wavelength interacting in the eye's light receptors. Vivid Coral Technologies changes the spectrum distrubution of light after it makes contact with your coral. Many companies have made your tank light more enjoyable by adjusting the light to your coral, without regard for your coral. Vivid Coral Technologies changes the light after your coral have basked in the it!

are devices that selectively transmit light of different wavelengths, usually implemented as plane glass or plastic devices in the optical path which are either dyed in the bulk or have interference coatings. Optical filters are completely described by their frequency response, which specifies how the magnitude and phase of each frequency component of an incoming signal is modified by the filter.

Is emission of light by a substance that has absorbed light or other electromagnetic radiation. It is a form of luminescence. In most cases, the emitted light has a longer wavelength, and therefore lower energy, than the absorbed radiation. The most striking examples of fluorescence occur when the absorbed radiation is in the ultraviolet region of the spectrum, and thus invisible to the human eye, and the emitted light is in the visible region. Vivid Coral Technologies impoves this viewing range.

Vivid Coral Film works by reflecting and absorbing upto 99% of the UV light and up to 90% of the blue light from the aquarium. This UV and blue is needed for fluorescent corals to fluoresce but it makes red and greens look washed out. Lighting manufacturer have created control systems to adjust the amount of other lights to make the tank look balanced. But the more light you put in the tank the more the corals need to fluoresce to make them visually POP!

Our Patent Pending technologies of placing a filter after the light has been used by the coral transforms the look of your tank in a way never befor thought possible. Our Vivid Coral Film brings out all of the colors in your aquarium.

Vivid Coral Film is designed to be used on coral tanks with heavy blue light. The more blue light you place over your tank the more the corals will fluoresce!*

CAN I SEE IT ON THE TANK?
Yes, Vivid Coral Film is an amber color overlay for the aquarium glass.
HOW DO I INSTALL IT?
DO YOU HAVE MORE THAN ONE FILM?
WILL VIVID CORAL FILM WORK WITH ANY LIGHT?

Blue Light Hazard, or in ophthalmology, high-energy visible light (HEV light) is high-frequency light in the violet/blue/cyan band from 400 to 500 nm in the visible spectrum. HEV light has been implicated as a cause of age-related macular degeneration. Many different organizations and even manufacturer of the LED's warn about the possible danger of viewing blue light. Read about what different organizations have to say about the effect of blue light on your eyes!

Cree stated the results of testing show significant health risks from some of Cree’s visible light LED components when viewed without proper filters.

Recent studies suggest that the blue end of the light spectrum may also contribute to retinal damage and possibly lead to AMD. The retina can be harmed by high-energy visible radiation of blue/violet light that penetrates the macular pigment found in the eye.

The blue-violet light that was discovered as part of this study is a 40 nm band of visible light that causes the maximum retinal cell death.

Read the whole artical at Review of Optometry

Blue light damage to the retina has research support from studies with both acute and chronic exposure. 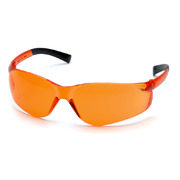