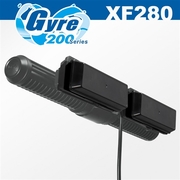 Next Generation of Water Moving Technology

The Maxspect Gyre is the world's first 'Gyre-Generator'. Compared to traditional powerheads and wavemakers that are based on propeller nozzle flow technology, the Maxspect Riptide is based on advanced crossflow technology which produces massive horizontal water movement leaving little to no deadspots.

Why gyre generator and not a wavemaker?

Wavemakers excel in making waves, while waves are spectacular to watch in motion, they are in fact moving the majority of the water vertically up and down, with relatively low horizontal movement, especially near the bottom of the aquarium.